Expanding Your Horizons (EYH) and the Girls World Expo were held to celebrate, inspire, and foster sisterhood in the young women of Wisconsin on October 28th, 2018. 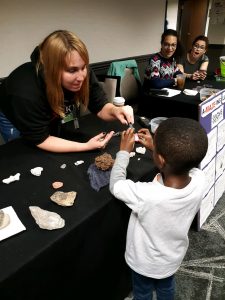 The UW-Madison chapter of Graduate Women in Science (GWIS) held a booth at the Girls World Expo so participants could learn about color, lasers, and different kinds of rocks, minerals, and fossils. The Expo and EYH are great examples of graduate students and professionals supporting young women, an underrepresented group in the STEM fields. Historically, the STEM fields have been allocated ‘masculine’ and persistent gender roles prevented women from being successful, with some historic figures, like Rosalind Franklin and Jocelyn Bell Burnell, having their research outright stolen or ignored. Some prestigious universities, like Harvard University, did not allow co-educational classes until WWII (and this was due to workforce shortages). UW-Madison itself had a twenty year delay for women to receive bachelor’s degrees and before then were placed into the “Female College”. This historical disadvantage of women in academia (and especially STEM) has led to the formation of groups like GWIS so we can build togetherness and not be as alone together as we are in our classes and labs. All girl events can be viewed as a restorative justice effort to focus on the historic and modern injustices done to women in the STEM fields. This is especially critical for any girl or woman who has another minoritized, intersecting identity.

Detractors argue that single-sex events are sexist against boys and men and that such events are not representative of a realistic workplace. This is a symptom of a patriarchal society trying to maintain a sense of male-dominance. Furthermore, a single-sex space provides more safety free from the gender roles and stereotyping that serve as “gate-keepers” for the world of science.  Lack of visibility of current woman-identifying STEM professionals, unconscious bias from educators and family members, and a misalignment between the motivations of girls and the values of the education system can all lead to girls losing confidence in their ability to see themselves as scientists and engineers (or self-destructive imposter syndrome in those that make it to university). Being the only or one of only a few girls/women in a class is intimidating (there is even a survival guide for it). An all-girl event can build that confidence and sense of security so they are not as easily deterred when they are older. A sense of belonging is what can make the difference in a young woman’s decision, so having some prior experience of not being the odd one out is important.